Around and about in Windermere

There are many reasons why Windermere is the country’s favourite lake.

At 10.5 miles long, 1 mile wide and 220 feet deep, Windermere is the largest natural lake in England providing plenty of options for boating, wild swimming, paddleboarding, walking along its shore or taking to the hills that surround it for breath-taking views over the water. If you do fancy a dip, be sure to keep an eye out for Arctic Char. These fish are left over from the Glacial era that formed the lake and Windermere is the only place in England where they can be found.

Arthur Ransome based his book Swallows and Amazons partly on the islands and waters of Windermere and partly on nearby Coniston Water. This, of course, is the perfect excuse to hire a boat for the day and have your own adventure on the lake!

Beatrice Potter was famously based in the Lake District, her home situated to the west of Windermere Lake, and an exhibition about her life is located just down the road from us in Bowness.

This is where we’re based and it’s the tourist hub of the South Lakeland area. It sits nicely halfway down the lake on the eastern shore, creating an excellent base from which to explore up and down the lake. There are over 10,000 boats registered on the lake which until March 2005 was the only lake in the Lake District without a speed limit, but now a 10-mph limit has now been imposed to protect the environment.

Directly opposite us is privately-owned Belle Isle, the largest of 18 islands on the lake and the only one ever to have been inhabited. The existing Belle Isle House was originally built in 1774 to designs by John Plaw and is unusual in that it is circular in plan, built of brick, three floors high with a four column portico; it draws closely on the Pantheon, Rome.

In the island’s long history of occupation, the Roman governor at Ambleside built a villa in the 1st century. In 1250 it was the seat of the district’s Lord of the Manor, and it formed a Royalist stronghold during the English Civil War. The island, and house, was sold to the Curwen family who renamed the island Belle after their daughter, Isabella.

In the centre, and only five minutes from our location, the only car ferry takes around 10 minutes to cut across the centre of the lake. It runs from Ferry Nab alongside us to Ferry House at Far Sawrey where there is a nearby Victorian viewing station built in the 1790’s. The station was built with tinted glass, each colour selected to recreate the lighting effects throughout the different seasons.

Over to the West are the Claife heights once owned by Beatrice Potter who on her death gifted it to the National Trust to preserve its wilderness for the nation. It has been claimed that in its woods is an example of all tree types in our country, but it would take a fair time to check that out.

To the north of the lake lies the village of Ambleside with the Roman fort of Galava nearby and Wray Castle, a castellated 19th century grand house, is also around the corner.

Nature around the Lake

From fields of bright daffodils, the scampering’s of resident red squirrels and the free wanderings of red deer, Windermere is the place to visit to spot the best of the Lake District’s wildlife all year round.

Windermere and the Lake District come alive with daffodils in late March and early April and are easy to spot on any grass verge or open green space. But these daffodils are not the ones so joyfully celebrated by Wordsworth in his famous poem. Wordsworth would have been admiring native daffodils, Narcissus pseudonarcissus, which are shorter and more delicate than garden cultivars and much harder to spot.

If you are walking in woods around Windermere keep your eyes peeled for red and grey squirrels. It is sometimes easy to tell them apart – but don’t rely on the coat colour. The reds are considerably smaller and often have long tufts to their ears. Greys always have small, rounded ears and have white hairs along the edge of the tail, giving the tail a halo..

Red squirrels are often spotted all around the Windermere area but to increase your chances head to woodlands at Claife Heights and Grizedale Forest; remember red squirrels prefer conifer trees as they mainly feed on the seed from the pine cones.

If you are walking in woods around Windermere keep your eyes peeled for red and grey squirrels.

Red squirrels have been found in England since the end of the last Ice Age and are part of our native fauna. The non-native grey squirrel was introduced to England in the late 1870s from America and is the primary cause of decline of the red squirrel. It does so by out-competing red squirrels for food in deciduous and mixed woodlands and transmitting a virus, the squirrel poxvirus, that is lethal to red squirrels.

Dark russet-brown in colour, with a paler buff rump patch and a pale tail, red deer are larger than other deer species you can find in the UK. You’ll have to head to Martindale between Ullswater and Haweswater to see a large herd of red deer but a visit to Grizedale Forest, west of Windermere is also home to the red deer and you may be lucky to spot one between the trees.

Cumbria Wildlife Trust looks after nature reserves that often have very special and unusual wildlife. There are many species of flowers, grasses, butterflies and dragonflies that could be lost from Cumbria if nature reserves weren’t carefully managed.

Head to Barkbooth Lot Nature Reserve, southeast of Windermere to visit one of these unique places. For a relatively small area, Barkbooth Lot packs a lot in! Open fell land, with a mix of rough grassland, bracken and scrub and two small tarns, contrasts with the oak woodland.  There is a meadow to visit and a small area of larch plantation.

On a clear day from the highest point, you can get magnificent views of both the Lakeland fells and Morecambe Bay. A visit here is always rewarding as the range of habitats means there is a huge diversity of species to discover.

The tarns on Barkbooth Lot are great places to spot damselflies and dragonflies.  Look out for the downy emerald dragonfly, the emperor, four-spotted chaser and golden banded dragonflies and the common and black darters. Beware near the tarn however as the rare medicinal leech lives here.

On the lake is a large selection of waterfowl that come and go with the seasons and there is enough interesting species of bird life to satisfy a “Twitcher”. If you’re really lucky you may spot an otter, there’s one that loves our mooring jetties.

Keep up to date with Aquatic's news and offers
Our location 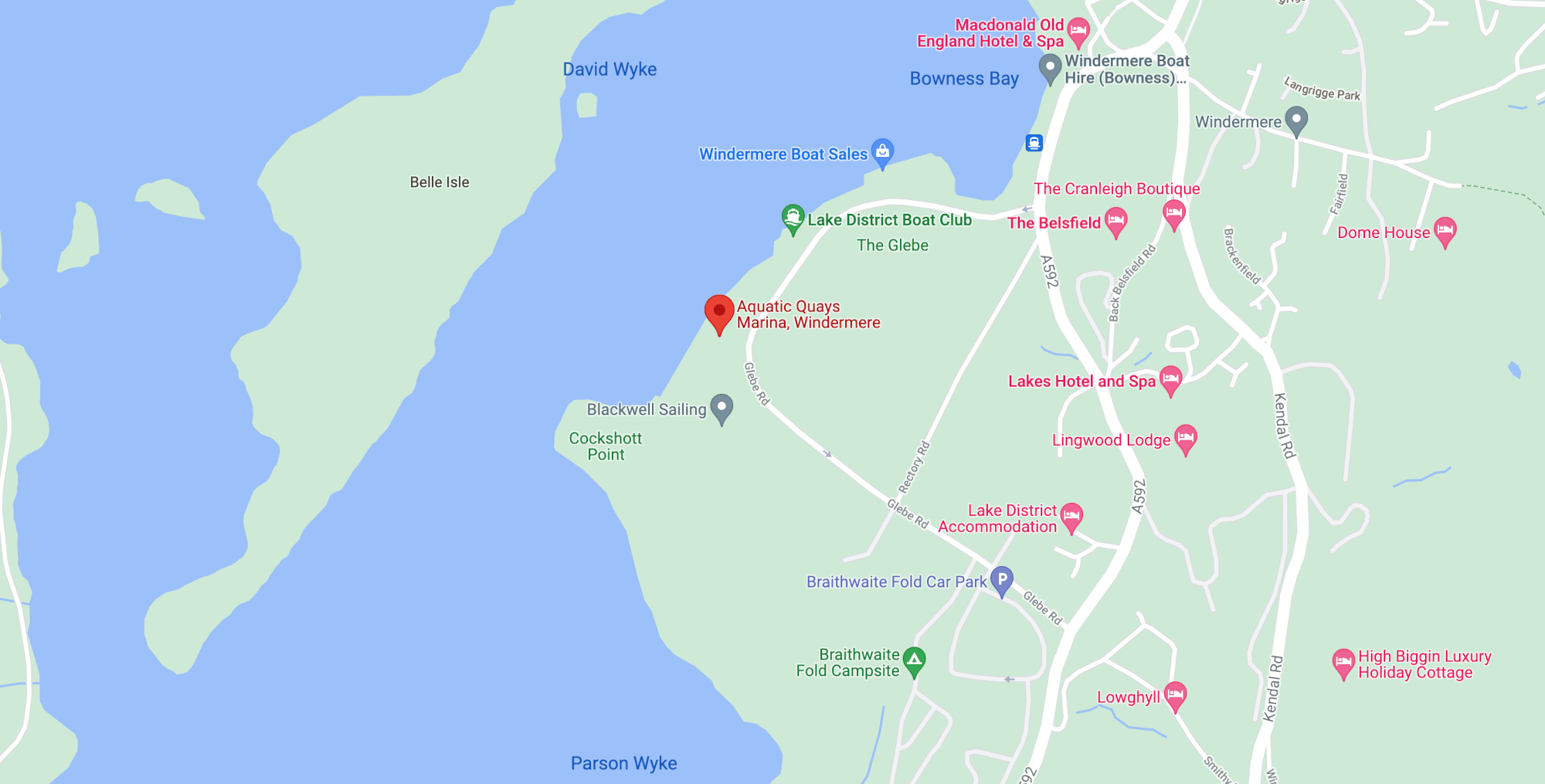